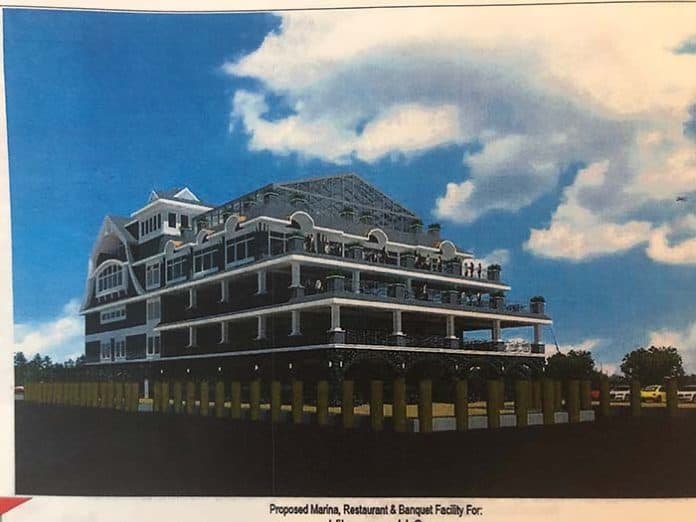 BRICK – Developers hope that their plans to build a four-story, 82.2-foot tall banquet facility and restaurant at the foot of the Mantoloking Bridge will be approved by the Board of Adjustment.

The board must agree to a Use Variance, since a banquet hall is not permitted in the B-2 zone; and a Height Variance, since the area is zoned for buildings no higher than 38.5 feet.

The applicant, Vilamoura, LLC has also asked for a handful of minor variances and design waivers, such as smaller than required parking space dimensions, setback relief, and more, for the site that was formerly Winter’s Yacht Basin and Hinckley Marina.

But before the applicant could present the plan to the Board of Adjustment during their regularly-scheduled May 1 meeting, the Mantoloking Borough attorney Jean Cipriani asked to have the meeting adjourned for “procedural requirements” since municipal land use law requires that anyone living within a 200-foot radius of the property receive a formal notice of the meeting.

Cipriani said that some sections of Mantoloking might be within 200 feet of the proposed restaurant and banquet hall. Attorney for Vilamoura, John Jackson, said that Brick’s engineering department and tax assessor’s map prove that the border of Mantoloking is 747 feet from the site.

“The issue is the shortness of notice; the residents received not even 48 hours,” Cipriani said.

Jackson noted that the mayor of Mantoloking – who was in the audience – lives on the bay, and pressed to find out of Cipriani was there on the authorization of the Mantoloking Borough council or not.

“It is only fair to the applicant to know who is the objecting party,” Jackson said.

After disputing the issue for more than an hour, Cipriani said “it would not be incorrect” to say that she was representing the borough of Mantoloking.

Mantoloking Borough was not the only objecting party. Attorney Gerald Darling was also at the meeting to object on behalf of his client, Marion J. Lee, whose home on Beaton Road shares a property line with the Vilamoura property.

Vilamoura, LLC, which consists of brothers Barry and Joe Maurillo, and their lifelong friend and business partner, Vito Cucci, presented architectural plans for the structure, which has 42,011 square feet of indoor floor area, and 17,348 square feet of outdoor deck area.

The men operate three wedding venues in New Jersey, including the Park Savoy in Florham Park, the Nanina’s in the Park in Belleville, and the Park Chateau in East Brunswick.

Local architect Dan Governale of Barlo, Governale and Associates said he took cues from local architecture for the restaurant/banquet hall and for an additional 2,250 square foot footprint marine structure, which would house facilities for boaters.

Even though the site is about 19 acres, there were not many places that could accommodate the banquet facility, Governale said, since there are wetlands on the property, plus boat and marine storage.

The ground level would feature a casual oyster and shrimp bar for dock-and-dine customers, with patio tables and a bar, which would operate seasonally from April to October.

The ground floor with its 17,061 square-foot footprint would also contain a valet area with parking, restrooms, enclosed trash and storage rooms, and an elevator and stairway.

The first floor would have an elevation of 19.2 feet and would feature a year-round seafood and steak restaurant with seating for 200.

The floors above the restaurant would be dedicated for the banquet hall. The second floor would be a reception area for the cocktail hour, and the ballroom, with a 16-foot ceiling, would be on the third floor. The top of the structure would feature a glassed-in area for wedding ceremonies. All spaces could accommodate up to 350 wedding guests.

Weddings take place on Thursday, Friday, Saturday and Sunday nights, and average about 220 people, Joe Maurillo said. They typically start around 5 p.m. and run for five or six hours.

The application will be carried to July 10 Board of Adjustment meeting when the objecting attorneys will make their case.

Vilamoura LLC has hired a traffic engineer who will present his findings and address concerns about traffic jams on Mantoloking Road, especially in the summer since the county road is one lane in each direction.

As part of the application, a new traffic light is proposed for the intersection to the entrance of the complex, which would be aligned with the existing driveway associated with Traders Cove Park and Marina. 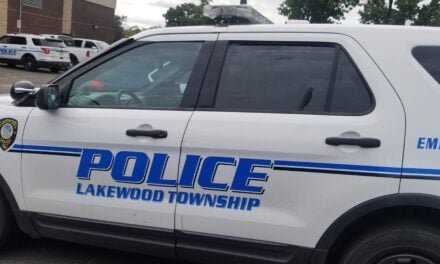 LAKEWOOD: Lying in the Grass 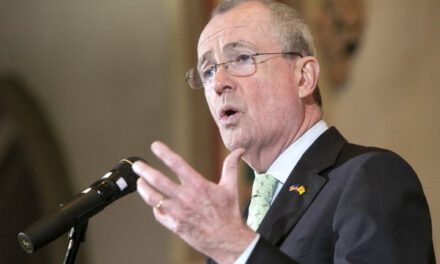 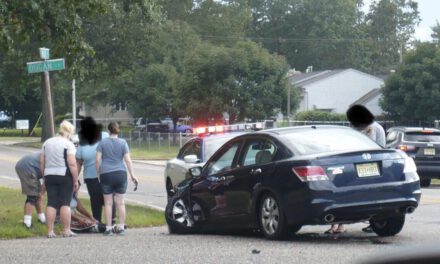